1. Open your Vital synthesizer as standalone or as plug-in in your DAW.
2. Left click on the menu icon or rightclick the preset name and click on “Import Bank”. 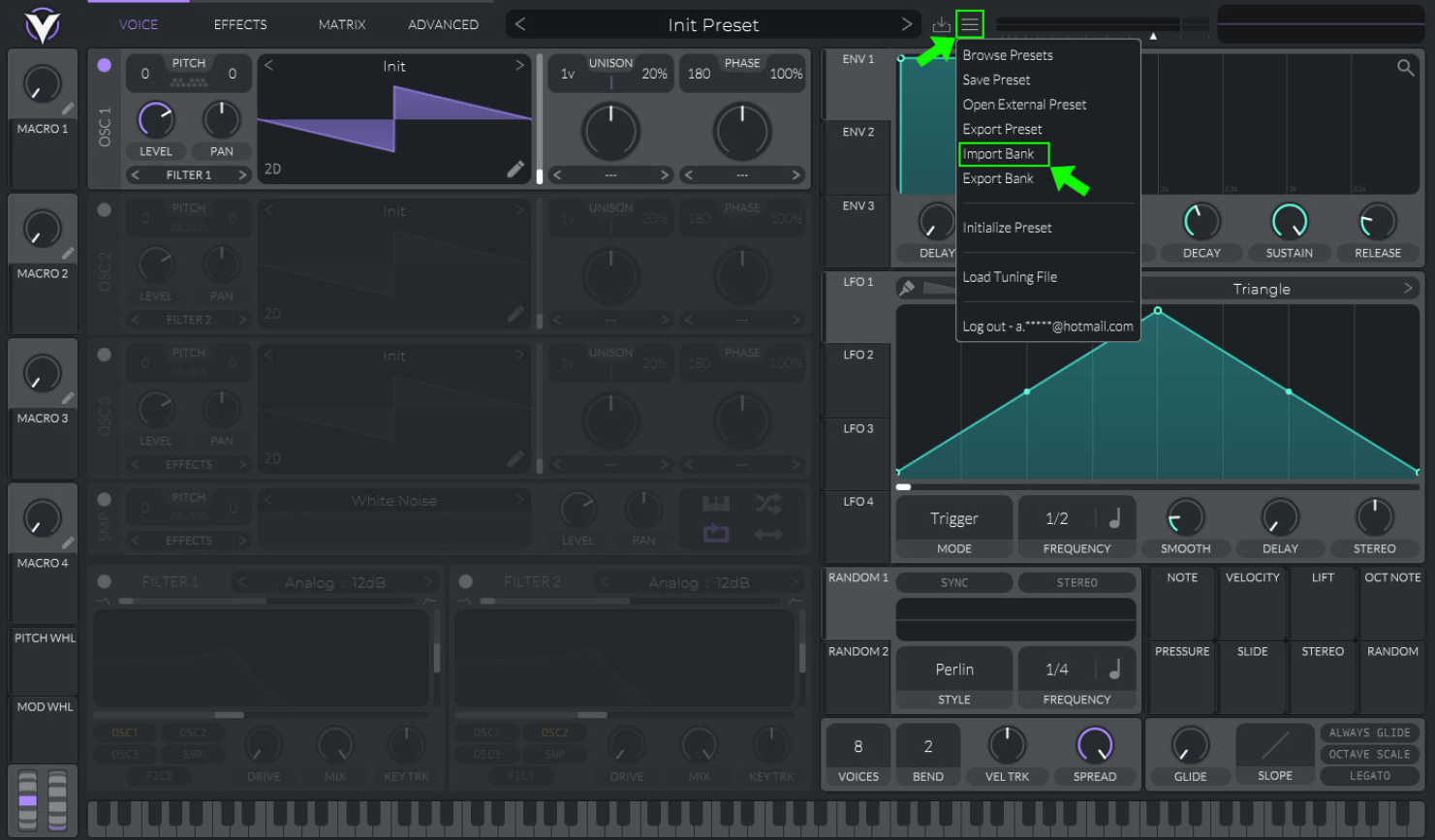 3. The filemanager of your OS opens up.
4. Now navigate to the location where you extracted the Vitalbank product(s). Navigate into the “Vitalbank”-folder, select the Vitalbank in it and confirm your selection.
5. The Presets should then already be loaded into your Vital and you should now be available to select the presets in the presets browser and make music with them! 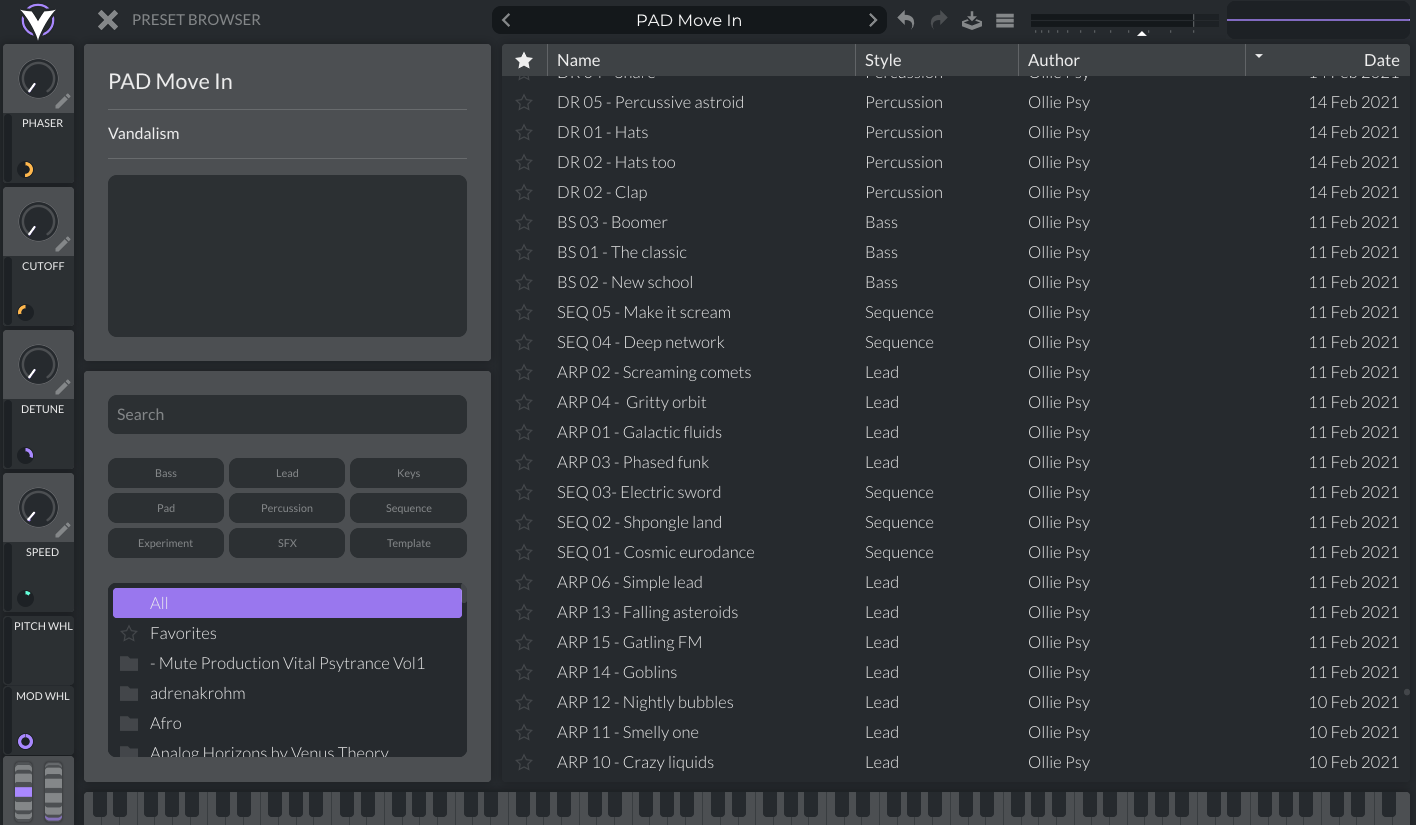 You are now ready for Music Producing!

The Noises and Wavetables folders contains all the raw samples loaded in the sampler of Vital, that may be used in the presets creation from various VitalBanks.
Sometimes are separately included with Vitalbanks, so that you have the freedom to change the samples in your presets for more possibilites while producing!

About Synthesizer Presets:
These files are pre-configured settings for a synthesizer, which can be used as a starting point for creating new sounds. They are often included with software synthesizers and can also be purchased separately in the form of sample packs. Presets typically include settings for various parameters such as oscillator waveforms, filter cutoff and resonance, envelope settings, and modulation routing.

Synthesizer presets are designed to be easy to use, they are created by sound designers or other experienced synthesizer users, and they can be a great way for new users to learn about the capabilities of a particular synthesizer. They can also be a great time-saver for experienced users, who can quickly access a variety of different sounds without having to program them from scratch.

Synthesizer presets are available for all types of synthesis techniques, such as virtual analog, sample-based, granular, and wavetable synthesis, among others. They can include a wide range of sounds, from classic analog synth sounds to modern, cutting-edge electronic sounds, and they can be used in a wide range of musical genres.

Synthesizer presets are available in different file formats, such as .vital, .fxp, .fxb, .nmsv, .sxt and others, depending on the synthesizer, and they usually need to be loaded into the synthesizer in order to be used.

What is Vital Synth:
Vital is a wavetable synthesizer software developed by the Belgian software company "dmitry Sches." Vital is a virtual instrument used for creating and manipulating sound in electronic music production.

Vital uses wavetable synthesis, which allows for the creation of complex and evolving sounds using wavetables, which are essentially sound samples that can be manipulated in various ways. The software features a user-friendly interface, powerful sound design capabilities, and a large collection of presets, making it a popular choice among electronic music producers.

Vital also includes a range of effects, including distortion, reverb, delay, and filtering, as well as advanced modulation options, making it possible to create a wide range of sounds, from classic synth sounds to cutting-edge experimental sounds.

Vital is compatible with both Windows and Mac operating systems and is widely used in a variety of electronic music genres, including EDM, trap, techno, and many others.